Reflection: A Lesson Before Dying

Nine months ago I finished reading A Lesson Before Dying by Ernest J. Gaines. I initially gave it a four-star rating because I felt it was lacking in showing Jefferson’s side of the story.
If you have never read A Lesson Before Dying, the story is about a young man who was found guilty of murdering a liquor store owner during a robbery and was executed.  Jefferson is a young man who is described as being “slow” and who follows two young men into the liquor store. Jefferson claims that one of the two men was the one that killed the liquor store owner. When the police officers arrived, they found all three men dead and Jefferson taking money from the cash register.  Jefferson went to trial for the robbery and murder of the liquor store owner.  His lawyer tried to establish his innocent by comparing him to a “hog.”  This comparison of “hog” brings me to Claude McKay’s poem about the race riots of 1919, If We Must Die:


If we must die, let it not be like hogs

Hunted and penned in an inglorious spot,

While round us bark the mad and hungry dogs,

Making their mock at our accursed lot.


Ernest J. Gaines’ use of “hog” is the center point of the story because Jefferson’s aunt, who is his caregiver enlist the African-American teacher, Grant Wiggins as a mentor for Jefferson.  She wants Grant Wiggins to teach Jefferson how to be a “man” so he can die a “man” and not a “hog.”
The story is told through the eyes of Grant Wiggins except for one chapter that Jefferson is telling his story before his execution.  I, as a reader, wanted to hear from Jefferson’s mouth what had happened in the liquor store.  When Mr. Gaines did not let that happen; I felt cheated as a reader.  I didn’t get it why he chose not to have Jefferson explain himself.  I did get the whole “man” part.  Because at the end, Jefferson “walked” like a “man” to his death and with that he taught Grant Wiggins how to be a “man” and take responsibility.
Yes, that is a lesson learned.
But, also what I learned from A Lesson Before Dying, by witnessing what has been happening with the killing of black men and boys from Emmett Till to Eric Garner, is that whether one whistle’s at a white woman, steals cigars and cigarettes, holds a toy gun, celebrate at a Bachelor’s Party, wear a hooded sweatshirt and eat Skittles or just having a right to defend someone:
A black man pleaded to the white men


And said, “Keep your mouth shut if you


Wanna live to be sixty-four.”
-fromEmmett Till (He was just a child)


Is that it is justifiable to kill a black man or boy because in the eyes of the law—they are always in the wrong.


Note:  I have changed my review to five-stars because I get it now. 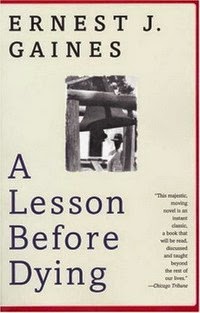